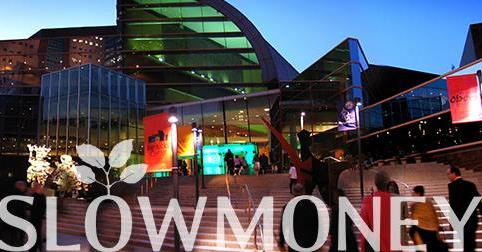 It had been awhile since I visited Louisville.

In fact, before last week, the last time I was even in Kentucky was in 2001. And I don't think I was there for more than a day.

It's not that I have anything against the Bluegrass State. After all, three of its claims to fame are pretty high on my list of importance: Muhammad Ali, Bill Monroe, and bourbon.

Of course, while I certainly enjoyed some of the latter on my recent trip, it wasn't the mouth-watering native nectar that brought me there. It was something much more important: food security and the ability to help bolster it.

My plane touched down in Louisville on Monday afternoon.

After a quick Uber ride to the Galt House Hotel and a 45-minute power nap, I headed over to the Kentucky Center for the Performing Arts to get my credentials for the 2014 Slow Money conference.

In short, Slow Money is a different perspective on investing. Instead of multinational corporations and too-big-to-fail banking institutions, it focuses its investments on small enterprises that anyone can understand: farming, food processing, food distribution, and nutrition.

The Slow Money mission statement explains it in the following way:

A new generation of entrepreneurs is starting to rebuild local food systems and the capital available to them is insufficient. If we want this capital to start flowing today, this year, this decade, if we share the belief that we don’t have another generation to wait for “them” to figure it out or be pushed in this direction by disruption or collapse, then we have to roll up our sleeves, sink our hands into the soil of the economy and start planting.

I'm a fan, and can think of few better things than investing in the future of food and food sovereignty.

In keeping with my libertarian treehugger philosophy, Slow Money empowers individuals to provide for themselves in a responsible and sustainable way, without the heavy hand of government or the tactical bullying influence of Big Ag.

Of course, as an investor, I also find slow money intriguing for the simple fact that profits and food sovereignty is a powerful combination.

As reported in the Slow Money State of the Sector report, since 2009, more than $38 million has been invested in over 350 deals as a result of Slow Money local activities, regional events and national gatherings.

While $38 million may not sound like much, it's actually quite impressive when you consider all of this capital has been raised through a grassroots network of farmers, investors and activists. What makes it even more impressive is that despite the returns on many of these slow money investments coming in at less than 5% over three-year time periods, slow money investors continue to support this movement with their wallets.

Of course, this does bring up a reasonable, and somewhat philosophical question: Is Slow Money about investing or is this more about charity?

Although I'm probably not going to win any Slow Money fans by saying this: Most folks don't consider a 0% loan as a real investment. Sure, you will get a return. It's just that the return isn't in the form of dollars. It takes the form of other things, like contributing to the health of local economies, bolstering food security and being a productive member of your community.

I don't discredit these returns. They are all quite valuable, and personally I wouldn't have a problem offering a 0% loan to someone who I believe is doing something honorable. But the truth is, most investors don't think this way. And if not taken into consideration, it is this truism that could stall the growth of the Slow Money movement.

To date, nearly $40 million has been raised through Slow Money initiatives. And I'm willing to bet that the majority of this money was invested by folks who aren't too concerned about getting a monetary return on their investments. This is wonderful and I couldn't be happier to know that there are so many righteous individuals doing right by Mother Nature and the farmers that nurture her.

But here's the problem: These folks are the “low hanging fruit.”

There are only so many people who can afford to make 0% loans and even less who would be willing to make them.

That's not to say there isn't interest in investing in local, sustainable economies. But I suspect the pool of selfless individuals investing in Slow Money ventures today is quite shallow. And at some point, it's going to dry up.

For Slow Money to remain a positive force, I would argue that it needs to look to the future and figure out how to tap the very large and very lucrative retail investor market. I'm talking about folks who do care about the future of food, the environment and local economies, but also expect a reasonable monetary return on their investments.

To accomplish something like this would not be particularly difficult.

As an analyst, I constantly come across stocks that are solid plays on any number of industries. These aren't lightning-fast trades, but instead, stable investment opportunities that do deliver steady returns of anywhere from four percent to eight percent per year.

The downside to many of those investments, however, is that they are made through the public markets, where too many still believe the illusion that they can accurately predict that which is inherently unpredictable.

When you invest in a stock, you're not really investing in a particular company. At least not the way we used to. No, today you're investing in a bunch of zeros and ones. You're betting on algorithms and the will of day traders and insiders.

I'm not saying you shouldn't invest in stocks. In fact, every balanced portfolio should have some exposure to the stock market. But there's still no doubt that when you do so, you're sending your money off to a place far, far away. The connection you have with that investment isn't tangible.

When you invest locally, however, you can see your money work. You can actually do your own due diligence, not by reading press releases, but by visiting your investments. Theres' something very safe and honorable about that. And I have absolutely no doubt that such opportunities would be attractive to plenty of retail investors.

Slow Money investment clubs seem to be a fantastic way for retail investors to invest in Slow Money initiatives, but the reality is that there aren't a whole lot of them around just yet. And not all offer monetary returns on investment.

The truth is, I'm not exactly sure what the solution is.

I find the Slow Money movement to be a very important one, as it's being facilitated by those who do not seek handouts from the government, but rather mutually-beneficial contracts between individuals that strengthen sustainable food systems and local economies. I also find that it's being run by some pretty smart and aggressive folks who are passionate about this movement.

Sure, passion may not pay the bills, but I'd rather invest in a passionate farmer that's doing right by the land instead of a fast-talking hedge fund manager who could care less about where his money comes from or who gets screwed in the process.

That being said, figuring out how to entice more retail investors into the world of Slow Money is an obstacle. I suspect some of that obstacle can be overcome by talking less about 0% loans and more about portfolio enhancement.

Joel Salatin is the Man!

Overall, I'm glad I attended this year's Slow Money event. I learned a lot, had the pleasure of listening to Joel Salatin and Vandana Shiva drop some serious knowledge on me, and met a lot of wonderful, like-minded individuals who I expect to be working with in the future on our own Slow Money investment opportunities.

In the meantime, check out this keynote address delivered by Joel Salatin. This man has been a huge influence on me over the past few years, and I strongly suggest you check out his book, “Folks, This Ain't Normal: A Farmer's Advice for Happier Hens, Healthier People, and a Better World.”