Severine von Tscharner Fleming and the Future of Farming 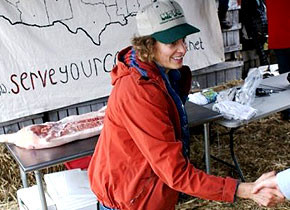 In 1987, I worked as a busboy for a company called Horn & Horn Smorgasbord.

It was your typical buffet-style restaurant, fully-stocked with every imaginable food item you could get your hands on back in the late 1980s.

The place was never empty. And on Friday nights, there would be lines wrapped around the outside entrance, where folks would wait for hours just to dive into these massive troughs of protein, carbs, and lots of gravy.

The food wasn't particularly good, but that was never the point. This was a place where everyday, middle-class folks could eat like gluttonous Kings. It was about quantity, not quality.

Of course, with cheap food – and lots of it – there was a tremendous amount of waste. I can't tell you many full plates of food I scraped into bins that would later be thrown into a dumpster. But like most suburban kids growing up in the United States during the 1980s, this was just how things were.

We didn't see food as nourishment. Certainly we never saw it as something to be honored and respected. It was simply something we bought and consumed in large quantities – paying no mind to where it came from, how it was produced, and where the leftovers went.

I didn't think much about this kind of stuff back then. In fact, not until well after college did I start to question our food system. What was I putting in my body? How was my diet affecting the planet? How was it affecting the global economy as well as local economies?

As time went on, I began to realize that something was severely wrong with our food system.

People all over the planet were starving while we were throwing out tons of perfectly edible food.

Small farmers were drowning in debt, unable to stay in business.

Over time, as a nation we somehow decided that growing our own food in a sustainable fashion was not important. At least not more important than more places to buy lots of “things.”

Today, most of our food does not come from small, local farms.

It comes from either centralized industrial farming operations or its imported from places all over the world where slave labor is cheap and legal, and oversight can be pretty sketchy.

As a nation, this has left us incredibly vulnerable to everything from geopolitical turmoil to acts of God that are particularly devastating to farms that are not properly diversified.

The truth is, we have become incredibly disconnected from our food, from our land and from the basic skills needed to sustain life.

It is because of this reality that I have dedicated so much of my time and energy to uncovering new ways to support local, sustainable farmers.

I buy most of my meat, fruits and vegetables from local farmers I've taken the time to meet. I try to patronize restaurants that source their ingredients locally. And I pretty much never stop singing the praises of the quality of good, local food.

So when I discovered an organization called the Greenhorns, I was floored.

The Greenhorns is a grassroots, non-profit organization made up of young farmers and a diversity of collaborators. Its basic mission is to recruit, promote and support a new generation of young farmers.

The Greenhorns was founded in 2007 by a Severine von Tscharner Fleming. And last month, at the Slow Money conference in Kentucky, not only did I have the privilege of meeting Severine, but she also answered a few questions I had about the movement. I'm including this short interview here. Check it out …

Why do you think so many younger folks are getting into farming?

We think that the next generation has a lot of hope for the future, and cares that what they're doing (for a living) is good for that future. The young farmers have a yearning for a community that has been lost in the past 50-100 years, and they're determined to recreate that community through a healthy and resilient local economy. They see locally grown food as crucial to the success of the communities they envision. Plus, they love the work, it's real and tangible, and it's also using their intellect. These new farmers aren't just laborers, they're smart, educated entrepreneurs working with other local and regional businesses to solve problems faced by past generations of agrarians.

What would you say are the three biggest obstacles for young farmers?

Start-up capital and land access. Without a question, and they often go hand in hand. The farmers have the skills, the networks and the know-how to run successful businesses, but they have often spent many years at low-paying farm jobs acquiring those skills, so the savings are not there.

During your presentation at Slow Money you discussed a study that presented the question: Is quality of life better with local ownership? It was a fascinating story. I was wondering if you could give our readers a quick version of what happened there, specifically with the report being suppressed by the USDA.

The study is legendary, I ran into it in a great book edited by Peter Barnes, called The People's Land, A land reform reader published by Rodale in 1974. Walter Goldschmidt studied two towns in the Central Valley of California: Avinda and Dinuba. The purpose of his study was to evaluate for USDA ( who commissioned the study) whether to extend irrigation support for larger land-holders ( larger than 160 acres). Goldshmidt was studying the social outcomes of land tenure, where both towns had similar production ( vegetables, row crops) similar town size and farm size, and similar history. But they had very different ownership regimes, one majority farmer-owned, the other majority absentee-ownership with management companies and sub contractors. The findings were stark, in terms of childhood health, education level, home ownership, quality of civic life, roads, church attendance, economic prosperity. In almost every metric, the owner-operated town had better outcomes. Who owns land matters. The kind of community you want to live in, drink water from, send your kids to school in, and attend a civic event in-- is a town with more owners, less income inequality, and people who are present, in their homes and engaged with the governance and cultural life of that place.

I really like the idea of a community ownership model where members of the community determine their food and land choices. It seems to me that this is an example of using property rights to ensure a safer, more robust food system for individual communities. Do you think that's accurate?

That sounds on the same lines of our thinking. All too frequently, our food systems are broken and distant. It's hard to see the effects of your food choices when the land, production facilities and individuals responsible for bringing them to you are thousands of miles away. Community involvement brings the farmer closer to their market. In fact, the CSA model started with a community of eaters getting together to identify a parcel of land, and hiring a farmer to grow their vegetables-- and pre-paying the farmer for the vegetables ahead of the season, in exchange for affordable, weekly produce.

With the community actively participating in some aspects of the farm decisions, they can more accurately aim production for what is needed in the community. This also comes with localization of food growing, but is exponentially improved when the land is collectively owned so that everyone, not just the farmer, has a stake in the long-term success of the farm. This effect is not just on individual communities, but the regional, national and global that hold and support them, as well as the ecological health of the community.

Small is beautiful, and big is subsidized. Small farms are certainly competitive, and according to the UN are the only way forward.

Here are two studies Severine suggested regarding small farms and their ability to feed the world:

If you have any interest whatsoever in food, farming, or excellent recommendations on investing in local economies, do yourself a favor and check out the Greenhorns website here.

**Severine von Tscharner Fleming (director) Severine is a farmer, activist, and organizer based in the Champlain Valley of New York. She is director of Greenhorns, a grassroots organization with the mission to recruit, promote and support the rising generation of new farmers in America. Severine has spent the last seven years gathering, bundling and broadcasting the voices and vision of young agrarians. Greenhorns runs a weekly radio show on Heritage Radio Network and a popular blog. They produce many kinds of media, from documentary films to almanacs, anthologies, mix-tapes, posters, guidebooks and digital maps. They are best known the documentary film, “The Greenhorns” and the raucous young farmer mixers they’ve thrown in 37 states and 14 grange halls. Severine is co-founder and board secretary of  Farm Hack, an online, open-source platform for appropriate and affordable farm tools and technologies , as well as National Young Farmers Coalition which now boasts 23 state and regional coalitions.  She serves on the board of the Schumacher Center for New Economics, which hosts Agrarian Trust, her latest startup, focused on land access for beginning farmers, and permanent protection of affordable organic farmland. Severine attended Pomona College and University of California at Berkeley, where she graduated with a B.S. in Conservation/ Agroecology.