Will these Two Companies Green Your Parking Lot and Fatten Your Wallet?

"It's like ice skating on the parched tongue of a West Baltimore hooker!"

That's how a dear friend of mine once described summertime in Baltimore.

I know, it's a bit over-the-top... And I'm not even sure how one comes up with such a bizarre analogy.

But make no mistake about it — those hot, muggy days that plague Charm City from June through August are brutal.

And last week, we got a dose of some serious heat oppression.

Folks walking from the bus were breaking a sweat before the bus even drove off.

Bike messengers were moving a lot slower; parking attendants were locked inside their air-conditioned booths, and hundreds of cars parked in the lot outside of our office were baking in the sun.

You could see the heat haze swirling around the rows and rows of sedans, SUVs, hybrids, and convertibles. It looked like high-end special effects from a James Cameron film. And I definitely felt for all the poor souls who had to climb into those mobile solar ovens at quitting time.

But it also got me thinking about a solar-powered parking structure I saw in California a couple of years ago. 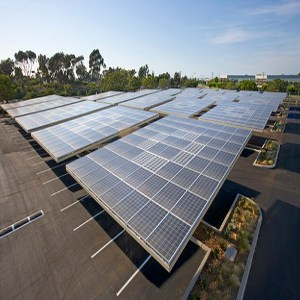 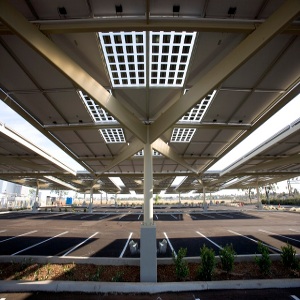 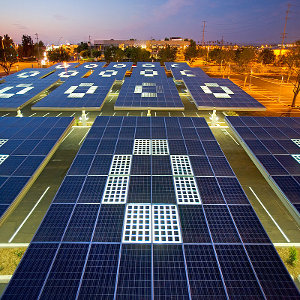 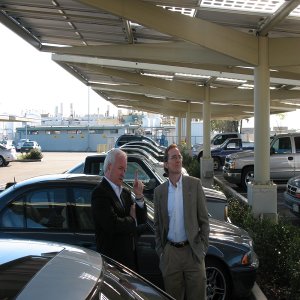 What a fantastic use of space — especially as we prepare to integrate electric vehicle charging stations into our parking lots and garages.

You know, often we think of parking lots of having no real value beyond providing a place to park our cars. It's almost as if building design ends at the curb, and the parking lot is a necessary afterthought.

But that's a lot of empty space that could be multi-functioning.

Envision has actually demonstrated this with 16 installed projects in the United States, most of which are in California. The company also has about 70 megawatts of projects in its pipeline right now.

Envision Solar has even developed a new solar tracking technology that can increase the output of these systems by 20% and reduce cost per watt by 15%.

The first prototype — which was funded by the state of Pennsylvania — will be completed this year.

The company claims it will be the world's greenest parking facility — utilizing solar and wind power, natural landscaping, and alternatively-fueled shuttle vans. The facility even boasts building specifications based on the U.S. Green Building Council's LEED Gold rating.

The appraised value upon completion of the project is about $31.7 million with projected net operating income of $5.1 million per year in years 2-10. The project has a 25-year life with the option to extend to 45 years.

Greening up parking lots and parking garages may not sound like the most exciting thing in the world — but there's some serious profit potential here.

So certainly we will continue to cover these developments going forward.

To a new way of life, and a new generation of wealth...