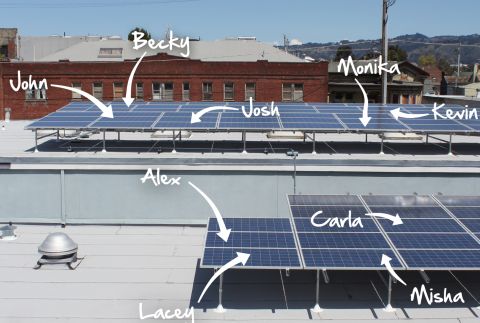 A family that I know desperately wants to switch to solar power.

But there's a problem. They live in the woods.

Even though they'd be more than willing to shell out the money to have solar panels installed on their roof, there's no use for them there.

The painful truth about residential rooftop solar is that it's often not available to those who really want it because it's only available to a small percentage of homes.

The vast majority of U.S. residences are either permanently obscured by trees, facing the wrong direction, structurally unsuitable for rooftop panels, or are within apartment buildings or other multi-family structures.

The limiting factors can be overwhelming.

This week, the solar panel manufacturer announced it has partnered with the Colorado-based Clean Energy Collective (CEC) to start offering solar solutions to consumers who might live in a place where rooftop isn't possible.

Either way, they are the same thing. They are ground-based solar installations that feed into the grid. Consumers in a single community buy the installation and the electricity it generates earns credit against their grid-based electric bills.

The result is the same as if consumers had their own rooftop solar installation, but it doesn't have to actually be on their roof, and the array can be purchased with a whole community's money.

So the benefit is that it opens up solar power to the 85% who can't have rooftop solar, and it makes the whole process a bit more affordable since buying is a group effort.

In a statement this week, First Solar clearly expressed why it's taking part in such a partnership:

For the multitude living in rented, urban properties, community projects are literally the only way they can participate in solar energy generation.

Under the terms of the partnership, CEC will continue to do what it has been doing since 2012: developing community solar projects.

All told, CEC has 40 community solar projects with 18 partners that come to approximately 36 MW of capacity.

First Solar has purchased an equity stake in CEC, and its CEO Jim Hughes, and Vice President of Strategic Marketing Marc van Gerven will take positions on CEC's board of directors.

Further terms of the deal were not made available, so it is not yet known how much money CEC will be getting to expand its footprint.

This partnership expands the scope of First Solar's wholesale and retail generation, and gives it a viable inroad to areas that are already underrepresented in solar generation.

By off-siting solar farms, people whose houses can't accommodate rooftop installation are suddenly available as customers, and by utilizing the community, the cost barrier of entry is padded for individuals.

According to data compiled by the Clean Energy Collective, community solar projects expand the potential solar market to more than 148 million homes!