Death of the Clean Coal Myth

FutureGen was NEVER a Good Idea! 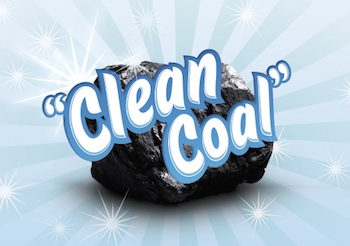 The federal government is pulling the plug on a clean coal project that it was supposed to help fund.

The FutureGen Alliance, a group of companies working on a coal project in western Illinois, will have to stop its plan going forward without the subsidies from the Department of Energy.

The project was slated to cost $1.65 billion, with the Energy Department (the American taxpayer) kicking in a one billion dollar subsidy. They call it stimulus funding, but it would be more accurate to say that it is resource wasting.

It is interesting that these coal companies are now abandoning this project that would have refit a coal-fired plant to store carbon dioxide underground that comes from the coal. Without help from Washington DC, it seems it is no longer “profitable”.

The companies had already spent $25 million, but that was in anticipation of the full federal subsidy. Meanwhile, the taxpayers of Illinois took it on the nose, with the state government having already spent $9 million on the project.

There are a lot of lessons to be learned from this one story, but don’t expect many people to actually learn them.

First, don’t assume that this is a Democratic Party thing or a leftist thing. This was first proposed by George W. Bush in 2003. But even the big spending Bush administration couldn’t make room in the budget for this one, so it was stopped due to rising costs.

Obama proposed a second version that was actually scaled down from the original, but once again, the government had to go back on its promise.

There is also a lesson to be learned here for private enterprises. You shouldn’t depend on the government for your profitability. There is no doubt that many companies benefit greatly from government favors and government handouts. But as we have seen here, if you live by the subsidy, you die by the subsidy.

This will be a more common theme in the future. As the debt continues to grow and the unfunded liabilities get larger, there are more and more people retiring and looking for their so-called entitlements. The budgets are going to get a lot tighter in the future than they are now, in the sense that these discretionary special projects will probably be the first things to go.

The most important thing to be learned here is that when the government spends money, it misallocates resources. This is the case almost all of the time. It is just more obvious in the case of an abandoned project for coal companies.

The free market gives us these wonderful tools called profits and losses. They can instantly tell a company if it is serving consumers. If there are losses, then the company has to figure out a way to cut costs or get more customers. If it continues to lose money, then it will probably go bankrupt and close down.

In a free market economy, losses are to be expected. They serve a vital function in that it minimizes capital investment from being wasted. It is quickly diverted to other areas that are profitable and are serving the consumer better and more efficiently.

Some businesses that receive subsidies may still survive without them. We can’t know for sure unless those subsidies are removed and put to the market test. If consumers really value the product, then the companies can raise prices and still be profitable without the subsidy.

In the case of the FutureGen Alliance, we know that this was not a profitable venture without government subsidies. The companies quickly folded the project when the funding was withdrawn.

This means the money (which represents wealth) should be spent elsewhere. If it is spent by the government in other areas, it will continue to be misallocated. The best way to allocate scarce resources is through a free market system with prices and profits and losses.

Taxpayers don’t have a direct vote every time their money is spent. Consumers do. Every time you spend your money, or even when you don’t spend your money, you are voting in the marketplace. You are sending signals on what you desire the most. This obviously doesn’t include a clean coal project in Illinois.