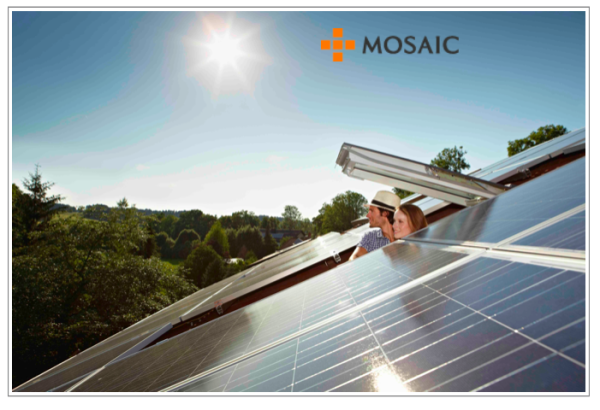 With that in mind, when Mosaic launched in 2011, it was called “The Kickstarter of Solar.”

It gives you a pretty clear idea of what Mosaic was originally about: Crowdfunding, but only for solar projects. When the site opened to the public last year, four campaigns for solar projects in affordable housing in California and New York were fully funded in 24 hours.

The gimmick was that it offered the elusive equity stake in these projects. With as little as a $25 payment, investors could expect an annual return of 4.5% on 7- and 9-year terms.

Because the Securities and Exchange commission still hadn't passed the revisions to the JOBS Act, investors still need accreditation, or have to be personally involved with the projects listed on Mosaic.

These guidelines still severely limit the appeal of services like Mosaic, as SEC accreditation in this respect means investors have to have a net worth of over a million dollars excluding the value of their home, or a net income of over $200,000 for the last two years.

Last year, the number of households that could have received accreditation was about 9.7 million, or 3 percent of the US population.

That knocks most of us out of the running for equity crowdfunding, and most users who sign up for Mosaic will see the following message:

In 2013, Wisconsin, Michigan, and Washington state all signed equity crowdfunding bills to ease the restrictions on investor accreditation. In Wisconsin's law, minimum net income was cut in half to $100,000 per year, and joint filers have to net $150,000. Washington State's law does not even require accreditation for investors to participate.

As of right now, fourteen states have some intrastate crowdfunding exemptions pending review.

In the meantime, however, Mosaic expanded into more areas than just crowdfunding.

In 2014, Mosaic branched out into the lucrative world of residential solar financing. The service began to offer loans to individuals looking to build new solar installations.

Setting up a new residential solar system can cost anywhere from $10,000 to $100,000 and up, so it's often an extremely costly endeavor for the average homeowner. That's why there are different vehicles for financing, such as the lease and PPA agreement, or various private or municipal loan and mortgage programs.

Mosaic says it takes “just minutes” to apply and there isn't a long approval review process. The entire process is streamlined into a web portal. The idea is that the long term of the loan means low monthly payments for the customer, and a relatively consistent profit for Mosaic.

By partnering with RGS and Enphase, Mosaic wants to turn solar loans into a vehicle of better repute.

In a press statement last June, Mosaic said: “Lenders and investors have historically viewed solar loans as riskier than their lease counterparts because there is no assurance that the system will continue to produce energy after installation. With the proactive service offering from Enphase Energy, loans now join leases in their appeal to more conservative investors and move one step closer to securitization.”