Why China is Getting Wind Energy Right: Its First 10 GW Wind Farm

I had never really wondered what Mars would look like if it had heavy industry. When I set foot in western China's Gansu Province in 2005, I knew.

The terrain outside Lanzhou, Gansu's capital and one of the most polluted cities in China, seems other-worldly. Bizarre stone shapes line the road as far as the eye can see. And, as it turns out, you can't cast your gaze very far through the brown haze that shrouds the city.

Pregnant women ride their bikes around Lanzhou wearing surgical masks so as not to inhale the noxious air, but so do many men. It's a frightening sight, and I'd be lying if I told you I didn't feel a little guilty that I would be able to go home to clean air while locals seemed doomed to a life of sooty snot and coughs.

Now, though, I feel more optimistic about Gansu's future. . . the province will soon be home to China's first 10 gigawatt wind farm.

China's Hinterlands are Ignored No More

People in Shanghai or Beijing will give you a funny look if you talk about places like Gansu. . . Those places normally only draw attention when something bad happens, like last year's terrible earthquakes or this summer's riots in Gansu's neighboring Xinjiang Uyghur Autonomous Region. Here you see Gansu highlighted in red: 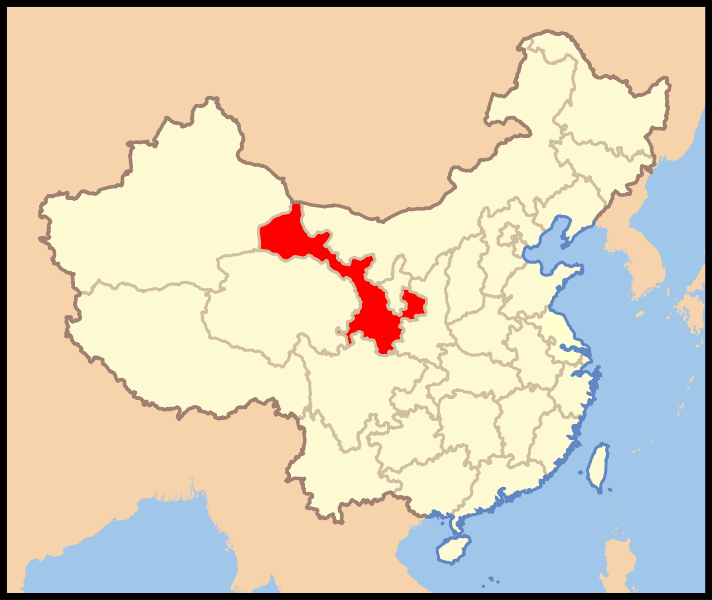 In spite of the East Coast's ambivalence about the hinterlands — or perhaps because of it — the Chinese government has set the goal of turning Gansu into a wind power equivalent of the enormous Three Gorges Dam, which has a 22.5 gigawatt capacity.

The 10 GW turbine cluster planned for the area around the city of Jiuquan is part of Beijing's $14.6 billion infusion into wind energy through 2010. With all that money, top brass want to more than double nationwide wind capacity by next year.

And when 2020 rolls around, China will have 100 GW of its own installed wind capacity up and connected. That nearly equals the entire world's current capacity of 121 GW!

But here's the rub. . . Grid connectivity is where the needle scratches across the record for wind farm proposals around the world. T. Boone Pickens' plan to build a massive wind farm in Texas got stuck on transmission line financing and regulatory clearance, and from China to Chile it's true that, as Jeff Siegel says, "If you can't move it, you can't use it."

So it's a good thing that China is using a full 23% of its massive half-trillion-dollar economic stimulus to prime the national grid for fresh renewable energy projects.

That's right. . . over $134 billion has already been allocated to create a high-voltage direct current (HVDC) network to not only tether wind farms to cities that need clean energy, but also to optimize that network with responsive smart grid technology.

How much has been set aside for smart grid in the U.S. stimulus package? A comparative pittance of just $6 billion. That's less than one-tenth of one percent of the $787 economic nudge we're supposed to get stateside!

China knows it needs to commit that money if renewable energy is to become a reality, rather than just a government talking point or stock-market fad.

China and the United States: an Uneven Partnership

You see, China's only got a 73% success rate right now when it comes to moving wind-generated power to end users. Out of 12.2 GW of installed capacity at the end of 2008, only 8.9 GW ever made it to customers.

For engineers and officials charged with transforming sprawling and far-flung provinces like Gansu — described to me by my local host as a "big dog-bone" on the map — transmission losses add up to failure.

So ground-up renewable energy expansion is what we like to see, especially in places like western China, where locals can leapfrog eastern mega-cities that will require much more intensive conversion to be RE-ready.

But why is the resource balance so heavily tilted when we compare Washington's grid plan to Beijing's?

Maybe it's the fact that many rural Chinese denizens still live a centuries-old lifestyle. . . they know not to put the cart before the ox, as it were.

Or maybe it's that we have plenty to learn from China. After all, as Secretary of Energy Steven Chu was quoted in this month's Time Magazine, "Whatever the U.S. and China do today will determine the fate of the world."

That pairing is uneven, and China is the larger chunk when it comes to clean energy.

Tech-side wind energy player American Superconductor (NASDAQ:AMSC) attributes much of its 80% share price increase in the past half-year to business activities in the Middle Kingdom. "China's our fastest-growing market," an AMSC spokesman said this month. "We're not counting on U.S. stimulus money," he added sharply.

So there's an American company depending on China for growth. In the other direction, some Chinese wind energy stocks are skirting the U.S. altogether, even when they're going for international attention.

Xinjiang Goldwind, named for the restive and resource-rich western region it calls home, has repeatedly rejected Wall Street IPO offers, opting instead to get cozy on the domestic Shenzhen secondary exchange (SHE:002202).

The company's near-term capacity goal is 546 MW for projects in the northeastern province of Heilongjiang. That's a chip shot towards China's 100 GW target for 2020, but every bit counts.

We'll keep you in the know about the goings-on in Gansu, and all the latest investment opportunities on the arc towards China's 100 GW wind energy goal.