A Solar PPA, but for Electric Cars?

Indianapolis is home to one of the most famous gas-guzzling events in the world. 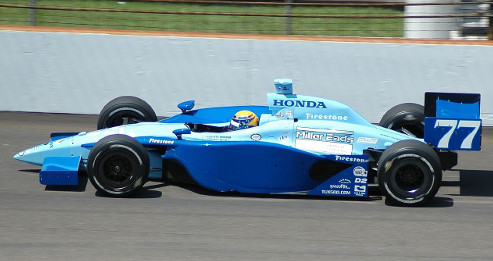 The annual Indy 500 auto race has been held every Memorial Day weekend since 1911, and the amount of gas the race consumes is shocking. In their high-performance cars, each racer consumes an estimated 1.3 gallons of fuel per mile.

Between all the racers on the track, that means approximately 21,500 gallons of gas is consumed in the single event.

That's enough gas to let 50 Americans drive the whole year, according to the US Department of Energy, which estimates the average American driver consumes 423 gallons of gas per year.

In light of that insane fuel consumption, would it surprise you to learn that Indianapolis was the first city in the United States to pledge to switch its entire municipal fleet to electric vehicles?

Indianapolis Mayor Greg Ballard calls it the “Freedom Fleet,” and it's building up to a mass of 425 plug-in electric and hybrid vehicles by 2016.

Mayor Ballard is a career marine, a Persian Gulf veteran and Republican, so he isn't the type of politician you'd expect to equip the Racing Capital of the World with electric cars.

But the move was rooted in the Mayor's experience in Saudi Arabia during the Gulf War. In 2012, Ballard said our dependence upon oil funds both sides of the international war on terror, and that “post-oil” technology has the power to make the world a more secure place. It is a move to limit dependence upon foreign oil, and is also expected to reduce the city's overall fleet spending by $8.7 million.

Right now, there are just 21 fleet vehicles on the streets of Indianapolis: some Nissan Leafs, hybrid Chevrolet Volts and Ford Fusion Energi models. By the end of 2014, there will be 100 in the fleet, and the remaining 325 will be added over the course of 2015.

All non-police cars will be hybrid or electric by 2016, and all heavy fleet vehicles such as snow plows, trash trucks, fire engines, and school buses, will be switched to Compressed Natural Gas or other non-oil fuels.

This transition is being handled almost entirely by Los Angeles-based company Vision Fleet. The company bills itself as a “full-service enabler and accelerator of large-scale alternative fuel vehicle adoption” specifically for public fleets.

Switching is a big undertaking, and it will cost Indianapolis approximately $32 million over seven years, but it's extremely tidy with Vision Fleet. Essentially, the company keeps ownership of the cars, handles all maintenance and fuel costs, and leases them to the city.

It's an approach that was inspired by the solar industry's power purchasing agreements (PPA) and the financing methods of Energy Service Companies (ESCOs). By bundling together purchasing, fueling, and maintenance, Vision Fleet can forecast the cost of competing solutions, and offer a lower rate up front.

The company says each gas-powered sedan owned by the city will cost taxpayers approximately $9,000 each year for the next ten years. With electric vehicles and big data fleet management, the company is promising a cost of $7,400 per year for taxpayers.

This cost-of-ownership projection model is called the “Clean Miles Solution,” and the city of Indianapolis has locked in this discounted rate with its contract with Vision Fleet.

This is the first widespread deployment the company is handling, so it has yet to be seen if it is a viable option for fleet management. However, the State of Colorado has commissioned Vision Fleet to do an audit of its fleet, so Colorado could be the first state to follow Indianapolis' lead.

If it works, it could also mean a broader appeal of financing models based on the solar PPA.