A Shift in the Global Wind Industry

Wind Companies to Adapt... or Die

This year will be the first since 2004 that the United States' wind industry won't surpass its previous year's growth.

And every report I read about the industry seems to be filled with buts, whiles, yets, and howevers...

Last year was a record-breaking year, with about 9.8 gigawatts installed. But the industry is in for a 40 to 60% drop this year, with analysts expecting anywhere from 6.3 GW to 7.1 GW to be installed...

While the U.S. has expansive coastal wind resources, offshore is expected to account for only 5% of installations by 2025...

Texas, Minnesota, and California have long been wind hot spots, yet transmission congestion, lackluster utility demand, and cheap natural gas have led to a significant reduction in the amount of power purchase agreements signed...

There has actually been unprecedented levels of federal support for wind energy. However, without a federal renewable portfolio standard (RPS) and streamlined transmission and siting processes, the time for projects to become operational will be greatly delayed...

A Shift of Global Winds

I know that sugarcoating bad news helps soften the blow, but when you're staring at a potential 60% one-year drop in wind installations — immediately following a year of record growth — there's no room for coddling.

Alarm bells should be going off: 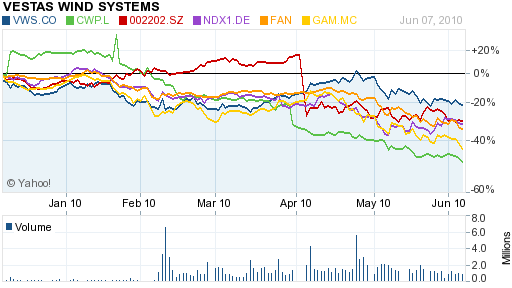 That's a one-year chart of some of the biggest pure wind plays on the market, along with the First Trust Global Wind Energy ETF (NYSE: FAN) — all are down 20% to 50% for the period. Others that operate solely in the U.S., like Broadwind Energy (NASDAQ: BWEN), are down even more.

So let's not ignore the problems...

And as a result, the industry is now facing an oversupply of wind turbines. Related stocks have been punished accordingly.

It's been a tough turn-around for what was once the most dominant cleantech industry. And it's forcing some much-needed changes.

According to Bloomberg New Energy Finance: “To compete in the era of low-priced natural gas, the levelised cost of wind generation must drop substantially on a MWh basis. This means the industry cannot sit on its laurels but must re-dedicate itself to technological innovation.”

The energy world is evolving. And it's time to adapt or die.

As such, the big boys have gone back to the drawing board.

Siemens is now producing a 3.6 MW direct-drive turbine that has no need for gears...

And GE (NYSE: GE), known for its 1.5 MW onshore turbine, is now taking orders for its new 4 MW offshore model, the first of which will go to Lake Erie.

Again, I'm not going to sugarcoat or dismiss the challenges facing the industry.

As Bloomberg put it, “The big players are seeking ways to improve turbine performance so the devices perform better and more consistently at lower wind speeds. This is in part recognition that the lowest hanging fruit is now gone with most of the windiest spots developed. Class 3 winds are what is left to develop and the industry must adapt to that reality.”

So investing is going to be tricky.

The companies in the chart above are at or close to their 52-week lows; and it's difficult to pinpoint any major positive catalysts in the near future.

If you're looking for a discounted wind buy, I'd stick to the Asian players or the larger conglomerates that won't be as adversely affected should the industry continue to stall.

Remember, China is now the largest onshore wind market in the world. And a plan to add 30 GW of offshore capacity by 2020 would put them ahead of the UK's ambitious 25 GW by 2020 target.

Not only that, but reports coming out of the recent American Wind Energy Association conference in Dallas show that Chinese and South Korean companies drew the largest crowds at breakout sessions and in the exhibit hall.

There will be ways to profit from this industry (A-Power (NASDAQ: APWR) and China Wind Systems (NASDAQ: CWS) come to mind)...

It'll just require more research and precision than before.